According to a survey of more than 1,150 Pennsylvania adults conducted from Oct. 30, 2020 to Dec. 10, 2020, residents are concerned about prescription drug costs and express a strong desire to enact solutions.

Many Pennsylvania residents experienced hardship in the prior 12 months due to the cost of prescription drugs. Indeed, cost concerns led 1 in 5 Pennsylvania adults (22%) to not fill a prescription, cut pills in half or skip a dose of medicine (see Figure 1).

In addition, over half of all survey respondents (51%) reported being either “somewhat worried” or “very worried” about affording the cost of prescription drugs. Worry varied significantly by income group, with residents in households making less than $50,000 per year being almost twice as worried as those in households making more than $100,000 per year (see Figure 2).

There is significant regional variation with respect to drug affordability issues in Pennsylvania (see Table 1). Eighteen percent of adults in the South Central/Lehigh Valley, Southwest and Northeast/North Central regions had difficulty affording prescription drugs in the prior 12 months, while adults in the Northwest region fared much worse, with 33% struggling to afford prescription drugs. Surprisingly, most of the regional variation related to adults not filling their prescriptions. In contrast, similar numbers reported rationing prescription drugs, either by cutting pills in half or skipping doses, in each region. Residents of rural areas reported greater prescription drug affordability problems compared to adults in other areas of the state—28% of rural adults either did not fill a prescription, cut pills in half or skipped a dose of medicine in the past 12 months compared to 17% of non-rural Pennsylvania adults.

These hardships have a disproportionate impact on lower income households. As Figure 3 shows, households making less than $50,000 per year are more likely to have rationed their prescription medicines (by not filling a prescription, cutting pills in half or skipping a dose of medicine) than households with higher incomes. Still, roughly 1 in 5 households have experienced these hardships, regardless of the income group.

When given more than 20 options, the option cited most frequently as being a “major reason” for high healthcare costs was “drug companies charging too much money:”

When it comes to tackling high drug costs, respondents endorsed a number of strategies:

Pennsylvania residents are united in calling for the government to address high drug costs. Many have already tried taking personal action or would take action if given the opportunity:

In light of these prescription drug cost concerns—as well as concerns about high healthcare costs generally—it is not surprising that Pennsylvania adults are extremely dissatisfied with the health system:

There is remarkably high support for government action on drug costs regardless of the respondents’ political affiliation (see Table 2). 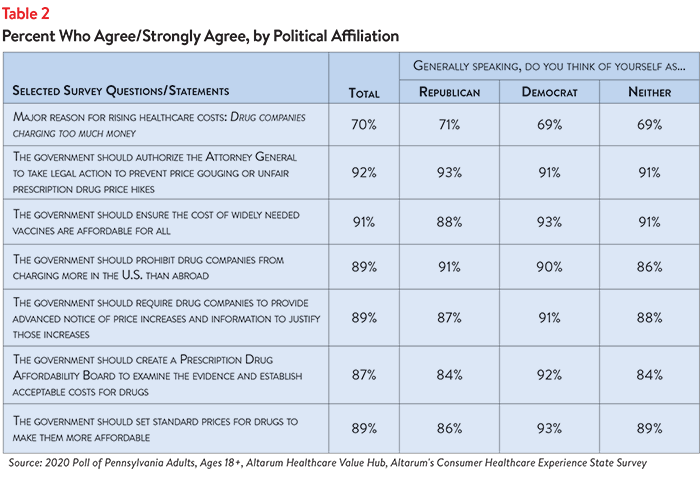 We caution readers against drawing strong conclusions about changes observed between the 2018 and 2021 CHES surveys. While the findings from the two surveys are remarkably consistent, small differences in the weighting approach and in the instrument itself (most significantly the addition of the COVID questions) indicate that direct comparisons should not be made. For more information on the Pennsylvania state surveys, go to www.healthcarevaluehub.org/pennsylvania-state-survey.