According to a survey of more than 900 Connecticut adults conducted from Jan. 31 - Feb. 9, 2018, there is great concern about prescription drug costs and a desire to enact solutions.

Given the higher levels of worry among Medicaid recipients and those with private coverage—and the fact that Medicaid recipients do not face cost-sharing for prescription drugs—it is instructive to look at worries about health coverage security and affordability.

The poll asked respondents about their fears of losing their health coverage or being unable to afford their insurance. Figure 2 shows that these fears are common, with close to three quarters of those on Medicaid being worried about both losing their coverage (72%) and affording it (71%). Those with private insurance were also worried about insurance affordability, with concern being highest (82%) among those who buy their own insurance followed by those with employer-sponsored insurance (62%).

In addition to being concerned about drug affordability in the future, many Connecticut residents are currently experiencing hardship due to drug costs.  About one-fifth (19%) of respondents report it was “Difficult” or “Extremely Difficult” to afford their prescription drugs.

Cost concerns lead 20% of respondents (or someone in their household) to not fill a prescription or to cut pills in half (Figure 3).

In light of these prescription drug cost concerns—as well as concern about high healthcare costs generally—it is not surprising that Connecticut residents are extremely dissatisfied with the health system:

When given more than 20 options, the options cited most frequently as being a “major reason” for high healthcare costs were:

What is remarkable is the high support for change regardless of the respondent’s political affiliation (Table 1).

While Connecticut residents are united in calling for a role for government in addressing high drug costs, they also see a role for themselves: 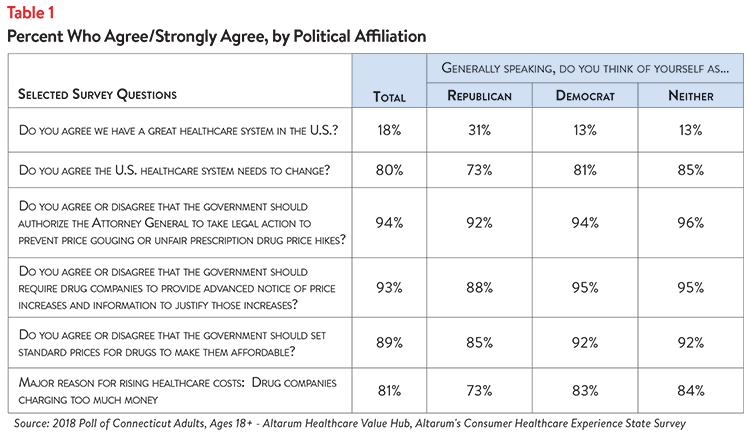 Altarum’s Consumer Healthcare Experience State Survey (CHESS) is designed to elicit respondents’ unbiased views on a wide range of health system issues, including confidence using the health system, financial burden, views on fixes that might be needed. Additional analyses of this data will be forthcoming.

The survey used a web panel from SSI Research Now with a demographically balanced sample of approximately 1,000 respondents who live in Connecticut. The survey was conducted only in English and restricted to adults ages 18 and older. Respondents who finished the survey in less than half the median time were excluded from the final sample, leaving 926 cases for analysis. After those exclusions, the demographic composition of respondents can be found in the table below. Additional information about the survey instrument is available upon request at hubinfo@altarum.org. 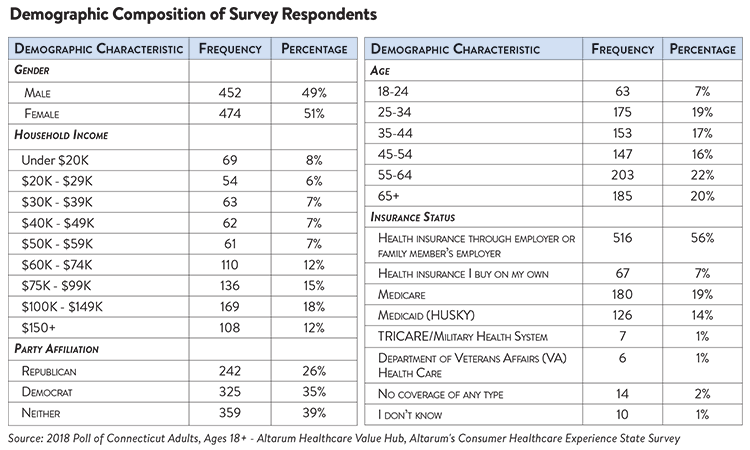