Like many Americans, Connecticut adults experience hardship due to high healthcare costs. All told, over half (55%) of respondents experienced one or more of the following healthcare affordability burdens in the prior 12 months:

1) Being Uninsured Due to High Costs

One-third (34%) of uninsured respondents cited “too expensive” as the major reason for not having coverage, far exceeding other reasons like “don’t need it” and “don’t know how to get it.”

2) Delaying or Going Without Healthcare Due to Cost

Nearly half (46%) of all respondents reported delaying or going without the following types of healthcare due to cost during the prior 12 months:

Despite many respondents reporting affordability burdens, the most frequently cited reason for not getting needed medical care over the past 12 months (reported by 20% of respondents) was not being able to get an appointment, exceeding a host of other barriers like cost, transportation and lack of childcare. This may be due to high demand for healthcare services that were delayed during the height of the COVID-19 pandemic or due to a lack of available providers, particularly in the case of mental healthcare.

Other times, respondents got the care they needed but struggled to pay the resulting bill. One-third of respondents (33%) experienced one or more of these struggles to pay their medical bills:

Unsurprisingly, the most common worry—affording the cost of nursing home or home care services—was most frequently reported by respondents ages 55-64. However, the second most common worry—affording medical costs when elderly—was most frequently reported by respondents ages 35-54, even though these services are applicable predominantly to an older population. This finding suggests that Connecticut respondents may be worried about affording the cost of care for both aging parents and themselves.

Worry about affording healthcare, generally, was highest among respondents living in low- and middle-income households, respondents of color and those living in households with a person with a disability (see Table 1). More than 4 in 5 (88%) of respondents with household incomes of less than $75,000 per year2 reported worrying about affording some aspect of coverage or care in the past year. Still, the vast majority of Connecticut respondents of all incomes, races, ethnicities and levels of ability statewide are somewhat or very concerned. 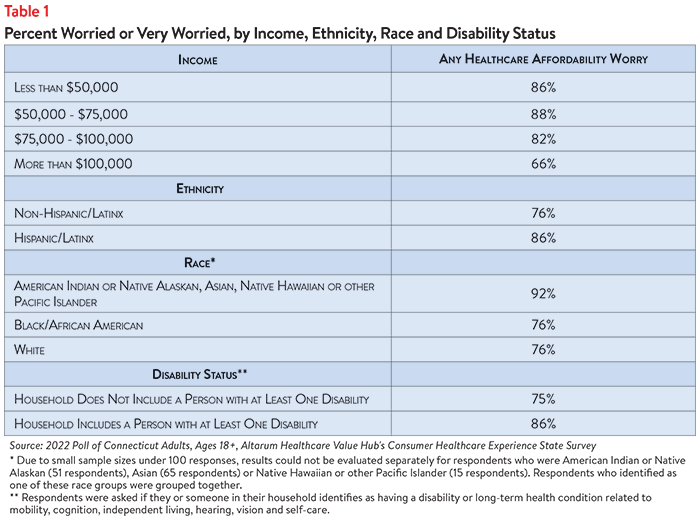 Concern that health insurance will become unaffordable is also more prevalent among certain groups of Connecticut adults. By insurance type, respondents with coverage they purchase on their own most frequently reported worrying about both losing and affording coverage, followed by respondents who have HUSKY Medicaid coverage and those with health insurance through their employer (see Figure 1).

Those with household incomes below $50,000 reported the highest rates of worry about both losing AND affording coverage compared to higher-income respondents, while Hispanic/Latinx respondents and those living in households with a person with a disability were more likely to be concerned about losing health insurance specifically than their non-Hispanic/Latinx and non-disabled counterparts (see Table 2). 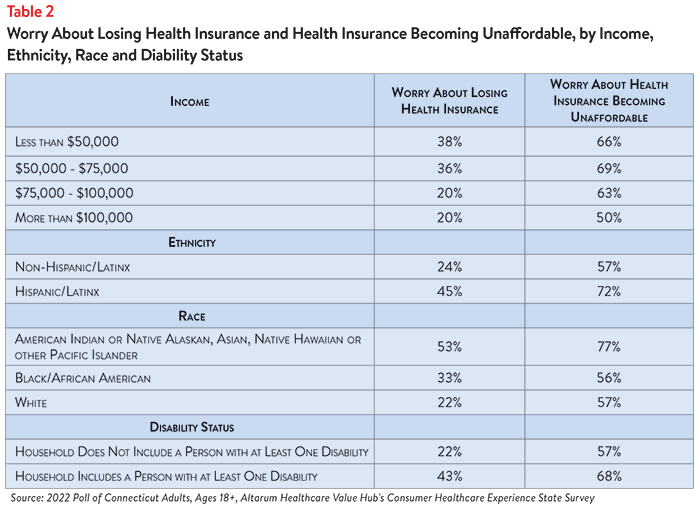 Unsurprisingly, respondents at the lowest end of the income spectrum most frequently reported experiencing one or more healthcare affordability burdens, with two-thirds (67%) of those earning less than $50,000 per year reporting struggling to afford some aspect of coverage or care in the past 12 months (see Figure 2). This is, in part, due to respondents in this income group reporting the highest rates of going without care and rationing their medication due to cost (see Figure 3). 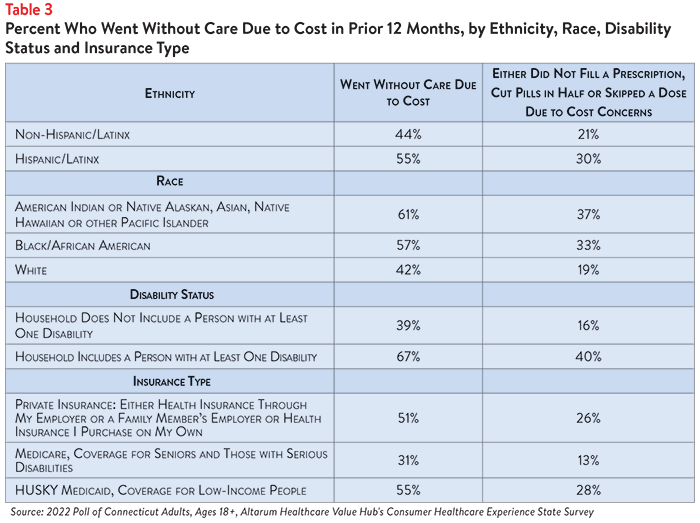 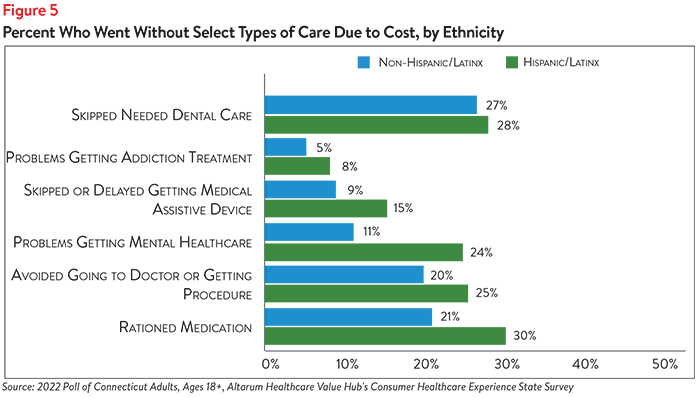 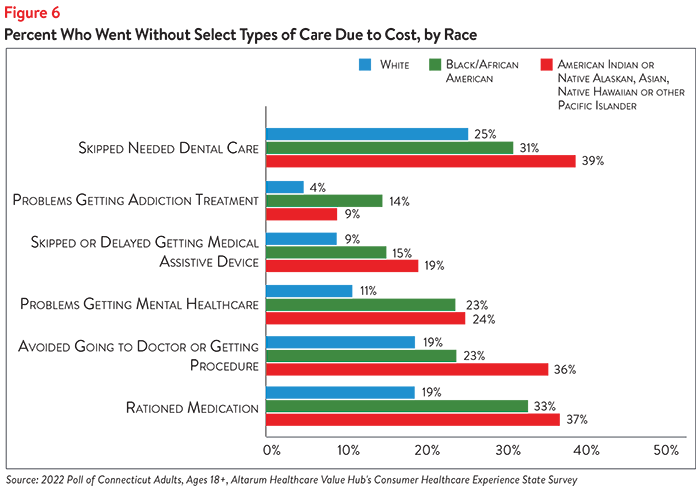 Of all the demographic groups measured, respondents living in households with a person with a disability reported the highest rates of going without care and rationing medication due to cost in the past 12 months. More than 6 in 10 (67%) of respondents in this group went without some form of care and almost one-third (30%) rationed medication, compared to 39% and 21% of respondents living in households without a person with a disability, respectively (see Table 3).

Those with disabilities also face healthcare affordability burdens unique to their disabilities—23% of respondents reporting a disability in their household delayed getting a medical assistive device such as a wheelchair, cane/walker, hearing aid or prosthetic limb due to cost. Just 6% of respondents without a person with a disability (who may have needed such tools temporarily or may not identify as having a disability) reported having this experience.

The survey also showed differences in the prevalence of financial burdens due to medical bills, including going into medical debt, depleting savings and being unable to pay for basic necessities (like food, heat and housing) by income, ethnicity, race, disability status and insurance type (see Table 5). Respondents living in households with a person with a disability had an even greater disparity, with more than half (54%) reporting going into debt or going without other needs due to medical bills, compared to 1 in 4 (26%) of respondents living in households without a disabled member. In addition, respondents on HUSKY Medicaid reported the highest rate of the above financial burdens due to medical bills (39%) compared to all other insurance types, followed by those who have private health insurance (36%). 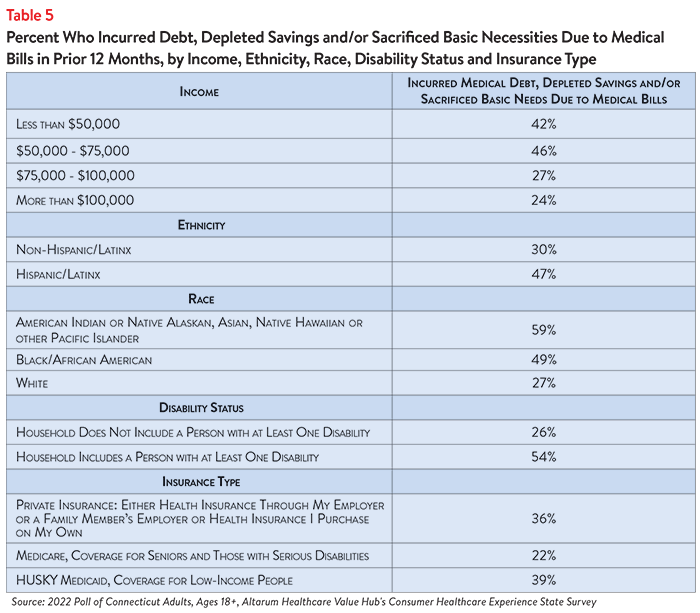 In light of Connecticut respondents’ healthcare affordability burdens and concerns, it is not surprising that they are dissatisfied with the health system:

To investigate further, the survey asked about both personal and governmental actions to address health system problems.

Connecticut respondents see a role for themselves in addressing healthcare affordability. When asked about specific actions they could take:

When asked to select the top three personal actions they felt would be most effective in addressing healthcare affordability (out of ten options), the most common responses were:

But far and away, Connecticut respondents see government as the key stakeholder that needs to act to address health system problems. Moreover, addressing healthcare problems is a top priority that respondents want their elected officials to work on.

When asked about the top three healthcare priorities the government should work on, the top vote getters were:

There is also remarkable support for change regardless of respondents’ political affiliation (see Table 6). 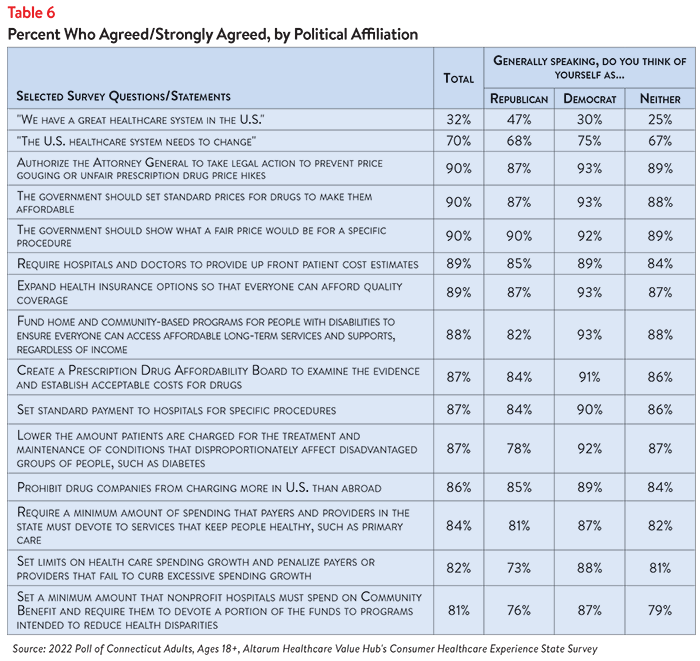 The high burden of healthcare affordability, along with high levels of support for change, suggest that elected leaders and other stakeholders need to make addressing this consumer burden a top priority. Moreover, the COVID crisis has led state residents to take a hard look at how well health and public health systems are working for them, with strong support for a wide variety of actions. Annual surveys can help assess whether or not progress is being made.

1.    Of the current 46% of Connecticut respondents who encountered one or more cost-related barriers to getting healthcare during the prior 12 months, 15% did not fill a prescription, while 15% cut pills in half or skipped doses of medicine due to cost.

3.    Nearly 2 in 3 (64%) of respondents said that they would consider using their tax forms to sign up for health insurance if they or their family needed it. This high level of interest persisted across racial, ethnic and income groups, with the highest levels of interest among respondents of color (66%) and those earning between $50,000 and $75,000 (72%).

The survey used a web panel from Dynata with a demographically balanced sample of approximately 1,500 respondents who live in Connecticut. The survey was conducted in English or Spanish and restricted to adults ages 18 and older. Respondents who finished the survey in less than half the median time were excluded from the final sample, leaving 1,306 cases for analysis. After those exclusions, the demographic composition of respondents was as follows, although not all demographic information has complete response rates: 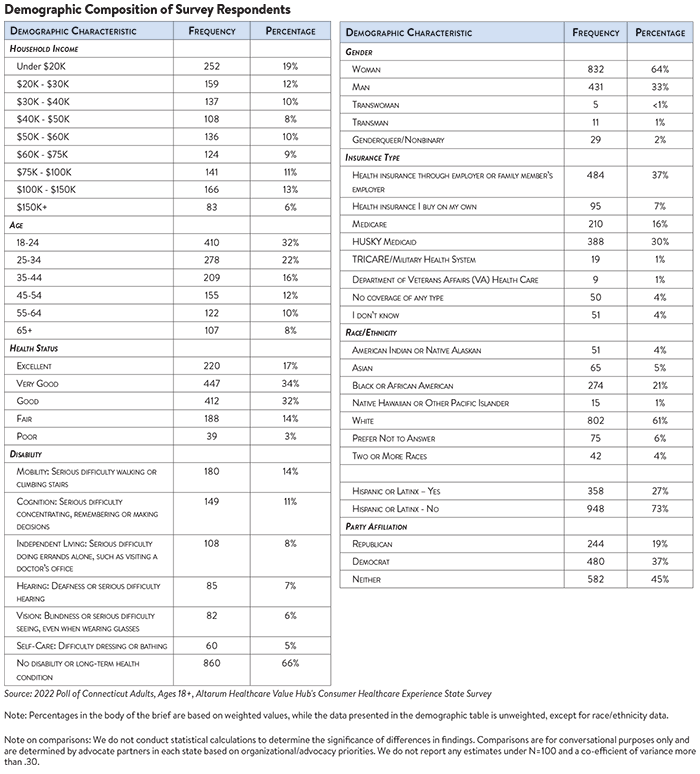