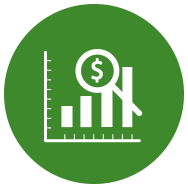 Too Much Waste in Our Healthcare System

There are a variety of estimates on how much of our healthcare spending is “wasteful,” but there is general consensus that it is far too large a share of our spending. Estimates of waste fall between 15 and 30 percent of spending;1 however, research is divided on how much waste can realistically be minimized or eliminated without negatively impacting consumers’ health.

There is no single standard for measuring waste; one common way to  look at waste is using the six broad categories identified by the Institute of Medicine: unnecessary services, excess administrative costs, inefficient care delivery, inflated prices, fraud and prevention failures.2 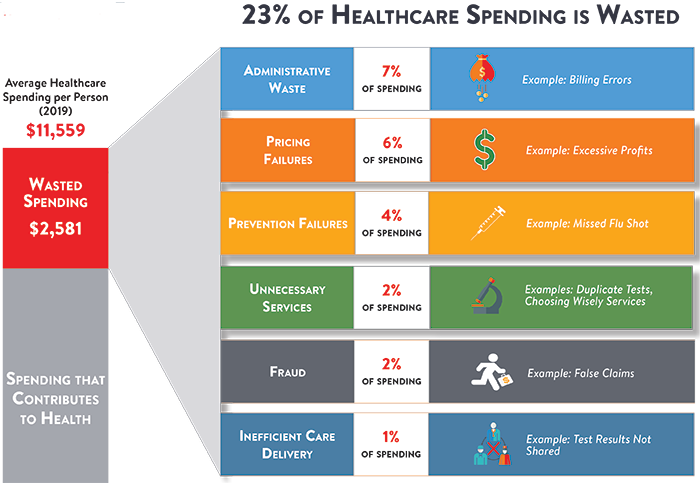 Unnecessary services, including over treatment and over prescription of medication, are the largest category, estimated to account for $210 billion in waste each year. This includes services that lack evidence that they produce better health outcomes compared to less-expensive alternatives.

The provision of unnecessary services seems to be more prevalent in some geographic areas and is not associated with better patient outcomes or significant changes in consumer satisfaction.3,4 For example, high spending areas were found to provide Medicare patients with as much as 60 percent more care compared to the lowest spending areas; however, few quality scores improved as a result of the increased spending.5,6 Studies surrounding unnecessary services primarily focus on antibiotics and cardiovascular procedures with serious gaps in research relating to preventive diagnostic services and few newer, more costly procedures.7

Administrative waste is the second largest category and is accumulated through excessive administration costs and profits, including claims processing, ineffective use of IT, staffing turnover and paper prescriptions. These costs are approximately $130 billion per year.8,9 In part, administrative waste stems from our fragmented way of paying for healthcare. But even without changing the way we pay for care, experts estimate we could eliminate a percentage of administrative spending without reducing access to care. A recent focus on improving the processing of claims has driven down the error rate and response time and increased cost savings, however, avoidable errors and inefficiencies in the claims process alone still added an average of $2.36 to every insurance claim in 2013.10

Inefficient care delivery, when doctors don’t effectively ‘talk’ to each other, results in $130 billion in wasteful spending every year. As a result of inefficient care delivery systems, patients receive repetitive tests and/or health complications, reduced functional capacities and often require further medical care in the future. A lack of coordinated care and inefficient IT systems prevent the streamlined delivery of care, and must be addressed in order to provide more consistent care, patient convenience, improved health outcomes and to lower costs.

Inflated unit prices exist as a result of provider market power, product manufacturer market power, non-transparent pricing and our third party system for paying for care.Excess prices account for $105 billion in wasteful spending every year and durable medical equipment alone is estimated to be inflated by at least 20 percent.11 Medications, however, are a much more complicated market that depends on patent exclusivity, the availability of a generic and the dispensing process.

While hard to pin down, between $75-272 billion of wasteful spending in the U.S. can be attributed to fraud and abuse, billed services that produce no value for our system.

The final category of waste, prevention failures, refers to treatments or services provided to  consumers with conditions that could have been prevented in a much more affordable fashion and accounts for $55 billion of  wasteful spending and a very human cost when it results in periods of poor health. For example, missed vaccinations, or failure to monitor and treat chronic conditions like diabetes may result in serious and costly health complications, decreased functionality and increased dependency of patients on costly health services. These costs include services to support consumers with chronic conditions, obesity, smoking, non-adherence and alcoholism.

According to physicians, “aggressive” practice styles of providing excessive or unnecessary care results from a variety of factors including practicing  defensive medicine to mitigate malpractice concerns, generating revenue, patient demand and limited patient interaction time to more appropriately triage a health complaint without tests or services.

Clinical performance measures and financial incentives such as increased reimbursement for high patient satisfaction scores, although an effective tool to increase patient satisfaction, may also encourage overtreatment. In some cases, these incentives may drive physicians to comply with patient requests despite a clear lack of efficiency.12

With the average patient appointment lasting less than 20 minutes, providers feel great pressure to deliver care that is fast, efficient and to address any patient demands.13,14 These pressures make it difficult to allocate a sufficient  portion of the limited appointment time to discuss costs associated with the treatment and more efficient alternatives.15

Additionally, income generation may act as  an incentive for some providers to overutilize health services. Thirty-nine percent of physicians believe other physicians “aggressively” order diagnostic tests  to generate extra income.16

By definition, waste is healthcare spending that can be eliminated without reducing the quality of care. While indirect evidence suggests a massive amount of waste exists in the U.S. healthcare system, it is much harder to identify the specific procedures and activities that can be eliminated, in part because some procedures identified as commonly overused may nonetheless benefit some consumers. An angioplasty inserting coronary stents, for example, is considered one of the most overused medical interventions in the U.S. However, some doctors argue that only a small portion of the procedures have questionable medical necessity.17 As a result, policy makers proposing cost containment measures will walk a fine line between eliminating “true” waste while not establishing barriers to patients seeking legitimate care.

A myriad of reforms can help identify and reduce the waste we pay for in the U.S. healthcare system. For example, policies should focus on:

Challenges to eliminating waste includes include barriers such as difficulty of culture change, or the lack of agility or willingness to make processes “right” instead of easy, political conflicts, lack of alignment with financial incentives and lack of a coordinated care focus.18