Nationally, consumer worry about healthcare affordability is well documented but now—for the first time—a new survey reveals how affordability concerns and ideas for action play out in Wisconsin.

Like many Americans, Wisconin adults currently experience hardship due to high healthcare costs. All told, 53% of Wisconsin adults experienced one or more of the following healthcare affordability burdens in the prior 12 months:

Almost half (47%) of Wisconsin adults encountered one or more cost related barriers to getting healthcare during the prior 12 months, including:

At lower rates, respondents also reported trouble getting mental healthcare and/or addiction treatment. Moreover, cost was by far the most frequently cited reason for not getting needed medical care, exceeding a host of other barriers like transportation, difficulty getting an appointment, lack of childcare and other reasons.

Of the various types of medical bills, the ones most frequently associated with an affordability barrier were doctor visits, dental and prescriptions, likely reflecting the frequency with which Wisconsin adults seek these services—or, in the case of dental, perhaps lower rates of coverage for these services.

Other times, Wisconsinites got the care they needed but then struggled to pay the resulting bill. More than a quarter (28%) of Wisconsin adults experienced one or more of these struggles while paying off medical bills:

In addition, most respondents (65%) were “worried” or “very worried” about not being able to afford health insurance in the future. The greatest concern was among those who buy private health coverage as individuals and those on Medicaid—approximately 4 in 5 are worried (see Figure 1). In addition, those on Medicaid and individual market enrollees were worried about losing their coverage.

The survey also revealed some regional differences in how Wisconsinites experience healthcare affordability burdens. Responses were grouped into three regions shown in Figure 2.

The Western region of Wisconsin reported the greatest rate of healthcare affordability burdens—sixty percent of adults had one or more of the three types of burdens described above. This is consistent with this region having the lowest median income. In the other three regions, about half of respondents reported trouble affording healthcare.

In contrast, most regions of Wisconsin were very worried about affording healthcare in the future. Only the Southern region reported somewhat lower levels of worry. 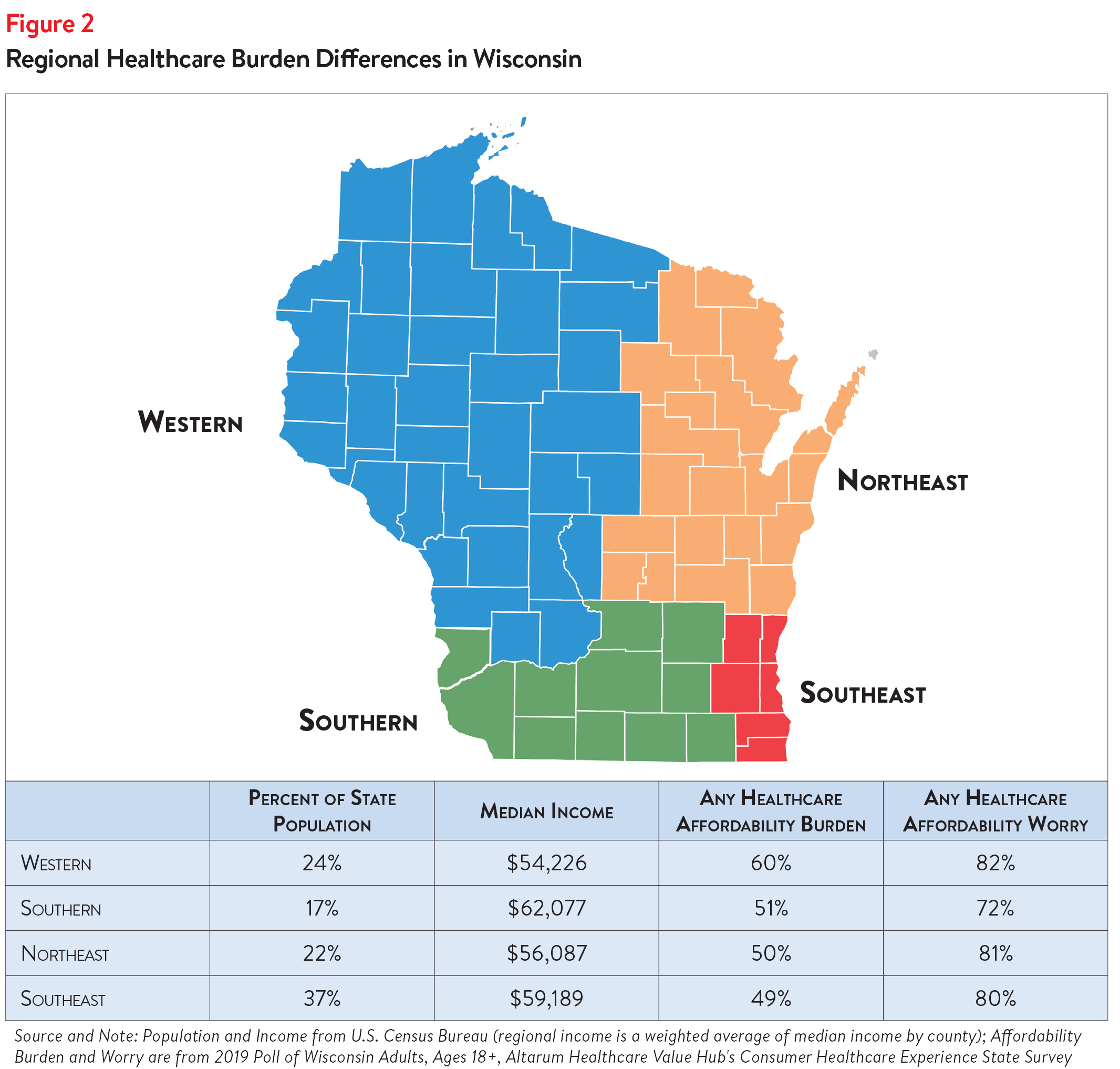 In light of these healthcare affordability concerns, it is not surprising that Wisconsinites were extremely dissatisfied with the health system. Statewide:

They also reported specific actions they have already taken, like researching the cost of a drug beforehand (51%), as well as action they should be taking—83% said they would switch from a brand to a generic drug if given a chance.

But far and away, Wisconsin residents see government as the key stakeholder that needs to act to address health system problems. Moreover, addressing healthcare problems trumps other issues that Wisconsinites want their elected representatives to work on.

When it comes to tackling costs and other consumer problems, respondents endorsed a number of strategies, including: 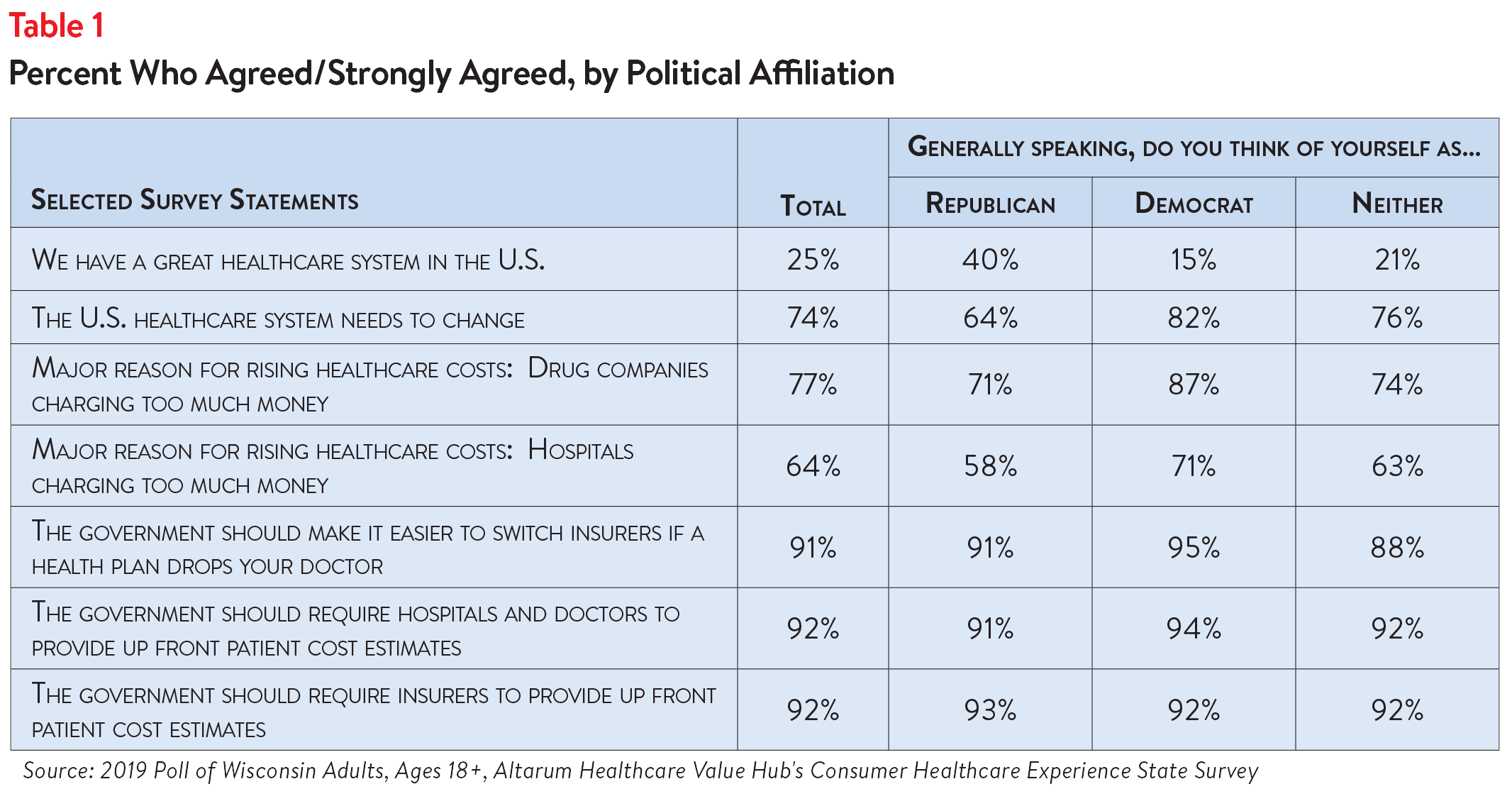 The survey used a web panel from Dynata with a demographically balanced sample of approximately 1,000 respondents who live in Wisconsin. The survey was conducted only in English and restricted to adults ages 18 and older. Respondents who finished the survey in less than half the median time were excluded from the final sample, leaving 1,071 cases for analysis with sample balancing occurring in age, gender and income to be demographically representative of Wisconsin. After the exclusion, the demographic composition of respondents was as follows. 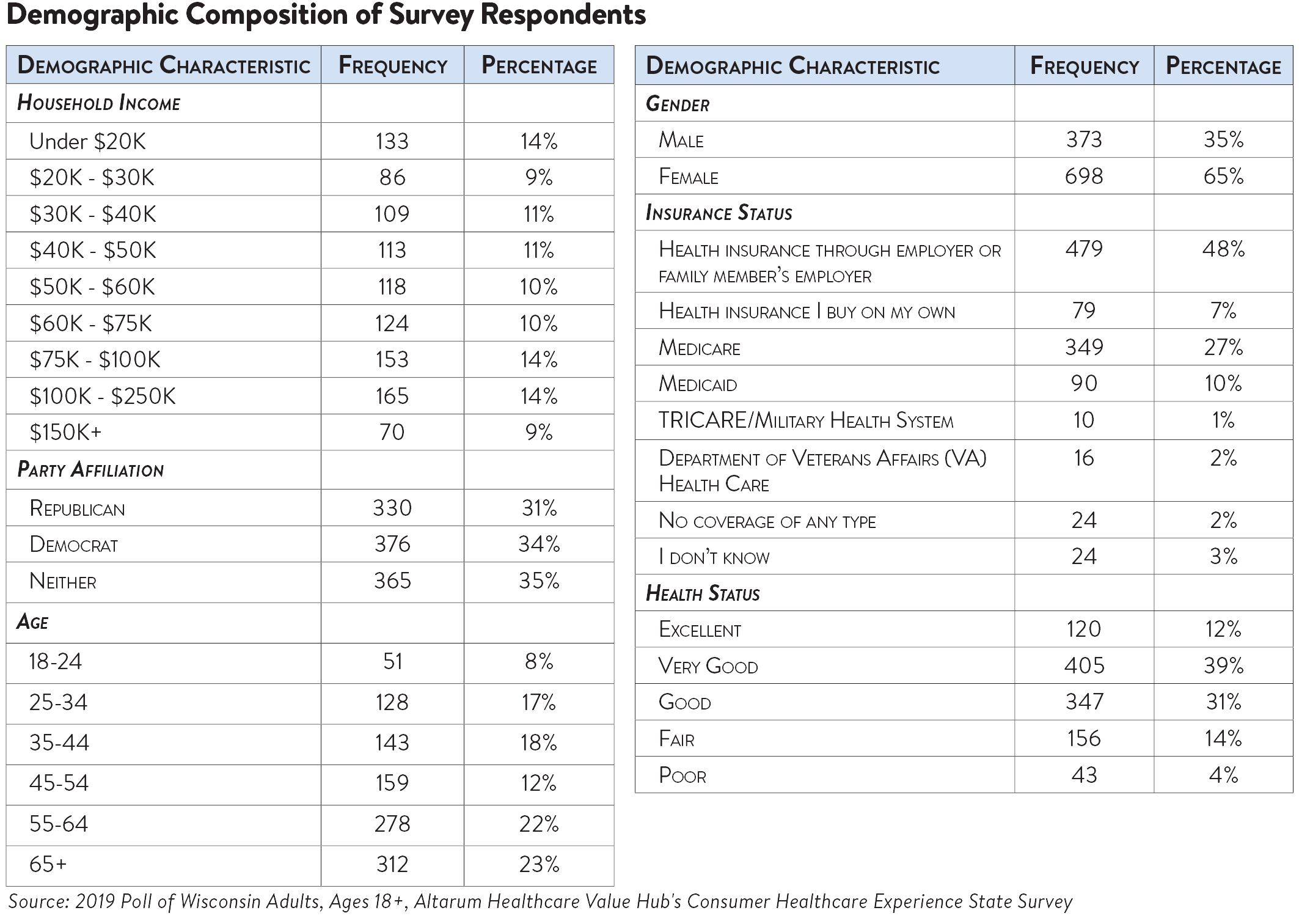