Unexpected medical bills are surprisingly common. They can take many forms: charges higher than expected; bills from unexpected doctors; and bills from out-of-network providers when patients thought they were in-network. States around the nation are taking a close look at these issues, particularly where patients received an unexpected bill from an out-of-network provider through no fault of their own.

A 2018 survey of Kentucky adults examined shows how prevalent surprise bills are in the Commonwealth. Respondents reported receiving unexpected bills regardless of insurance status. This analysis focuses on the respondents with private insurance (about 500 responses). Compared to adults with Medicare, Medicaid, Tri-care or Veterans Health, consumers with private insurance have fewer protections against high and unexpected out-of-pocket costs.

Smaller numbers reported being charged out-of-network rates when they thought the doctor was in-network (3%); being charged for services they did not receive (2%) or experiencing something else unexpected (4%). The prevalence of unexpected bills aligns with similar surveys of privately-insured adults.1

Kentuckians tried a number of strategies to address the surprise bill but were often not satisfied with the resolution. A slight majority (55%) of privately-insured Kentuckians who received a surprise bill tried to resolve the bill before paying it. As a first step, 38% contacted their insurance plan and 31% contacted the doctor, hospital or lab to resolve their unexpected medical bill (see Table 1).

Just 17% of privately insured Kentucky adults took more than one step to resolve the unexpected bill. Very few reported any of these courses of action:

Among privately-insured Kentucky adults with an unexpected medical bill in the past 12 months, most (66%) paid the bill in full or through a payment plan. A sizable minority were able to negotiate a lower bill or have their bill dismissed (28%) while 7% of privately insured respondents indicated their unexpected medical bill was sent to collections and left unpaid (see Table 2).

In roughly equal numbers, both satisfied and dissatisfied consumers report attempting to contact the health plan, doctor, hospital or lab after receipt of an unexpected bill. But consumers satisfied with how their medical bill was resolved were more likely to have tried additional strategies such as contacting an insurance broker or filing an appeal:

In contrast, consumers dissatisfied with how their medical bill was resolved more often reported paying their bill without disputing it (35%). They were also more likely to ask a friend or family member for help.

Perhaps not surprisingly, consumers satisfied with how their medical bill was resolved were more likely to have either negotiated a lower payment or had their bill written off or dismissed (see Table 4).

Privately-insured Kentucky adults receive unexpected medical bills at an alarming rate. The nature of these bills takes many forms from charges higher than expected, to bills from doctors they didn’t expect, to surprise out-of-network bills. Distressingly, one-quarter of these unexpected bills are not resolved to the satisfaction of the recipient. These Kentucky findings are consistent with other survey data showing unacceptably high rates of unexpected medical bills.

Data showing that survey respondents made only modest efforts to resolve their bill—and that many remain unsatisfied—are consistent with other survey data showing that consumers have a poor understanding of how to navigate their healthcare system. Consumers may not know they have the right to appeal a coverage decision, how to seek help from state regulators or how to navigate hospital charity care policies.3

Arming Kentuckians with complete information on how to address unexpected items on their medical bills could help them navigate the healthcare system and achieve a more satisfactory outcome. Kentucky policymakers may want to consider creating a dedicated state resource to help consumers with their billing problems, such as those in Connecticut and Vermont.4

Prevention is worth a pound of cure. A more effective strategy would be to prevent unexpected bills from happening in the first place. States have looked at ways of simplifying benefit designs5 and many states are taking a hard look at are consumer protections to address inadvertent bills from out-of-network providers whose charges can be many times those of in-network providers.6 While less common that other types of unexpected bills, the result can be exceedingly high bills that patients cannot manage.

1. A Consumer Reports survey found that nearly one third of privately insured Americans had received a surprise medical bill. https://consumersunion.org/research/surprise-bills-survey/  In addition, a Kaiser Family Foundation survey found that among insured, non-elderly adults struggling with medical bill problems, charges from out-of-network providers were a contributing factor about one-third of the time. A study by Yale University found 22% of visits to emergency rooms resulted in surprise medical bills. https://news.yale.edu/2016/11/16/yale-study-sheds-light-surprise-er-billing.

2. Across all types of medical bills—expected and unexpected—involvement of a collection agency was common. One quarter of ALL Kentucky adults have been contacted by a collection agency over a medical bill in the prior 12 months. See: Kentucky Residents Struggle to Afford High Healthcare Costs; Express Bipartisan Support for a Range of Government Solutions, Healthcare Value Hub, Data Brief No. 7 (May 2018).

3. A 2014 Kaiser Family Foundation survey found one-third of respondents did not know that if a health plan refuses to pay for a medically recommended service, an insured person has the right to appeal the plan’s decision. https://www.kff.org/health-reform/poll-finding/assessing-americans-familiarity-with-health-insurance-terms-and-concepts/.  A 2015 survey found three-quarters of privately-insured adults are unsure if they have the further right to appeal to the state/an independent medical expert if their health plan refuses coverage for medical services they think they need. Few (just 13%) could identify the state agency/department tasked with handling health insurance complaints. https://consumersunion.org/research/surprise-bills-survey/

4. Healthcare Value Hub, The Office of the Healthcare Advocate: Giving Consumers a Seat at the Table, Research Brief No. 25 (May 2018).

The survey used a web panel from SSI Research Now with a demographically balanced sample of approximately 1,000 respondents who live in Kentucky. The survey was conducted only in English and restricted to adults ages 18 and older.

Respondents who finished the survey in less than half the median time were excluded from the final sample. For purposes of this data brief, we restricted the analysis to only those with privately insurance (through respondent’s employer or purchased on their own) leaving 461 cases for analysis.

After those exclusions, the demographic composition of privately insured respondents is shown in the table below. Additional information on the survey instrument is available upon request by emailing hubinfo@altarum.org. 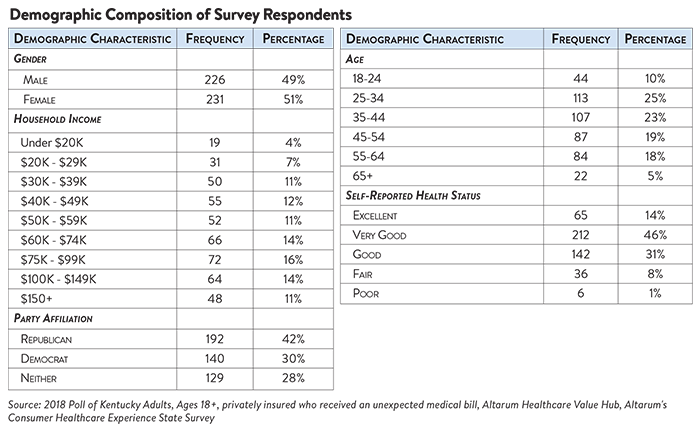