Fifty-one percent of Kentuckians encountered one or more cost-related barriers to getting healthcare during the prior 12 months:

At lower rates, respondents also reported trouble getting addiction treatment. Moreover, cost was by far the most frequently cited reason for not getting needed medical care, exceeding a host of other barriers like transportation, difficulty getting an appointment and lack of childcare.

Of the various types of medical bills, the ones most frequently associated with an affordability barrier were doctor bills, dental bills and prescription drugs, likely reflecting the frequency with which Kentucky adults seek these services—or, in the case of dental, perhaps lower rates of coverage for these services.

Other times, Kentuckians got the care they needed but struggled to pay the resulting bill. One out of three Kentucky adults (32%) experienced one or more of these struggles to pay their medical bills:

The survey also revealed some regional differences in how Kentuckians experience healthcare affordability burdens. Responses were grouped into the five regions shown in Figure 2.

The Eastern Kentucky region reported the greatest rate of healthcare affordability burdens—68% of adults had one or more of the three categories of burdens described above. This is consistent with this region having the lowest median income. In the other four regions, more than half of respondents reported trouble affording healthcare (see Figure 2). 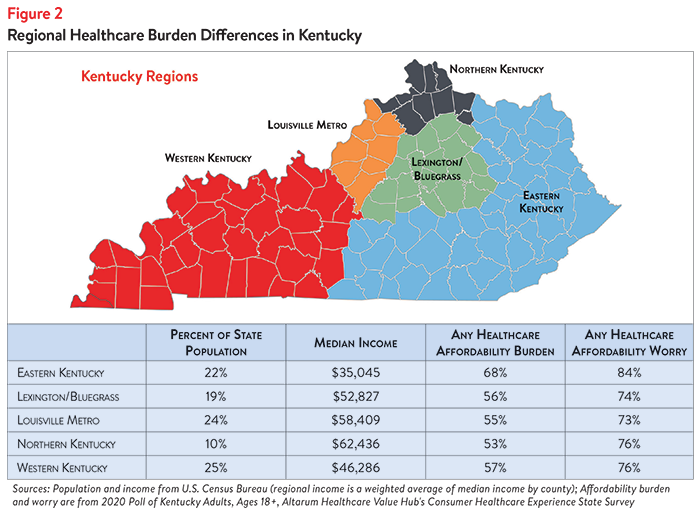 More detail is available in the 2020 regional Kentucky reports, which can be found at: www.healthcarevaluehub.org/advocate-resources/kentucky-healthcare-survey

In addition to affordability worries, new questions were asked about respondents' top worries related to the COVID crisis.1 When asked if worried about “affording treatment of coronavirus/COVID-19 if you need it,” 59% of respondents were “worried” or “very worried.”

Separately, out of twelve possible responses, respondents were asked to pick the top three things they were most worried about (see Figure 3). “Becoming ill from the virus,” not only ranked as the top worry among the choices, but it exceeded other worries by a wide margin, garnering almost twice as many “votes” as the next most common worry, “Job loss and resulting lack of wages.” 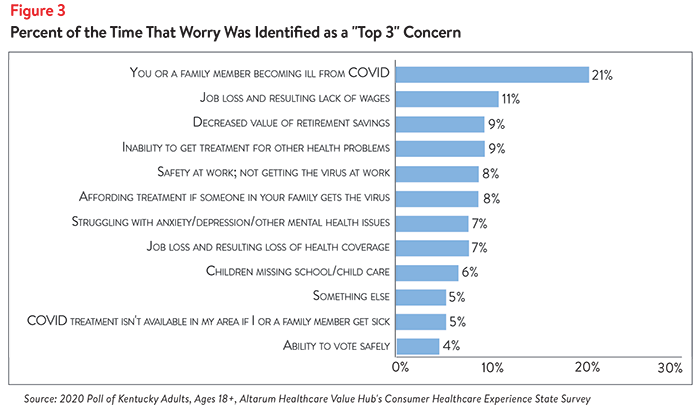 In light of these healthcare affordability and COVID concerns, it is not surprising that Kentuckians were extremely dissatisfied with the health system. Statewide:

The survey asked about both personal and governmental actions to address health system problems.

37%—Research treatments myself, before going to the doctor

They also reported specific actions they have already taken, like researching the cost of a drug beforehand (59%), as well as action they should be taking—80% said they would switch from a brand to a generic drug if given a chance.

The economic woes brought on by the COVID crisis likely contributed to “Economy/Joblessness” as a primary concern, but healthcare remained the top issue that Kentucky adults want their elected representatives to work on. 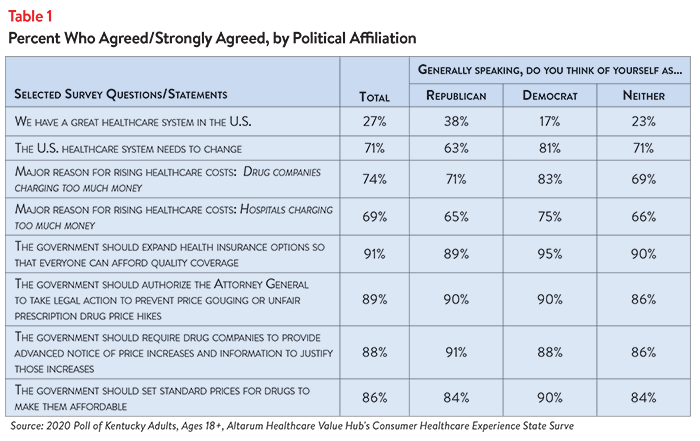 In addition to residents' views on the policies and approaches above, new questions were asked about support for and against policies related to the COVID crisis. Out of eleven possible responses, respondents were asked to pick the top three policies that would help address COVID-related problems. There was significant diversity in the policies supported, with the front runner, “Additional federal stimulus payments,” closely followed by four almost equally ranked options: “More financial help for small businesses,” “Improved public health emergency preparedness,” “Universal health coverage for all,” and “Price limits on needed vaccines” (see Figure 4). The least supported policy was “More financial help for large businesses.” 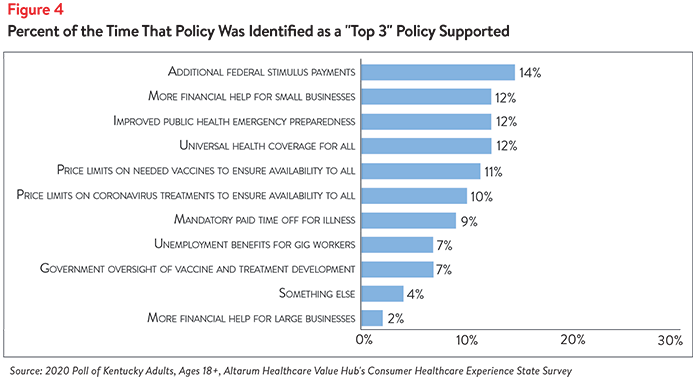 Far fewer respondents answered when asked about policies they did NOT support. Among the
responses we received, 23% indicated that they did not support “More financial help for large
businesses.” Trailing behind that (with 17% of the votes) was “Universal health coverage for all,” although more votes were cast overall in support. In this area, there was a lack of agreement across party lines, with Republicans far more likely to NOT support “Universal health coverage for all” as a means to address COVID concerns, compared to Democrats and those not affiliated with either party (see Table 2). It is important to note, however, that when asked generically about “Expanding health insurance options so that everyone can afford quality coverage,” 91% of respondents agreed or strongly agreed with this policy as a means of improving affordability.

When asked about the policies they did NOT support, respondents were given the option of selecting “I support all of the policies listed.” Nineteen percent of respondents selected this option.

The high burden of healthcare affordability, along with high levels of support for change, suggest that elected leaders and other stakeholders need to make addressing this consumer burden a top priority. Moreover, the current COVID crisis is leading state residents to take a hard look at how well health and public health systems are working for them, with strong support for a wide variety of actions. Annual surveys can help assess whether or not progress is being made.

We caution readers against drawing strong conclusions about changes observed between the 2018 and 2020 CHES surveys. While the findings from the two surveys are remarkably consistent, small
differences in the weighting approach and in the instrument itself (most significantly the addition of the COVID questions) indicate that direct comparisons should not be made.  For more information on the Kentucky state surveys, go to www.healthcarevaluehub.org /kentucky-healthcare-survey.

1. COVID-19 is the disease caused by the Coronavirus, which was characterized as a pandemic by the World Health Organization on March 11, 2020. For a comparison of how respondents from Kentucky and three other states answered our COVID questions, please see Healthcare Value Hub, How COVID Has Shaped Residents' Broader Attitudes Towards the Health System, Data Brief No. 86.

The survey used a web panel from Dynata with a demographically balanced sample of approximately 1,217 respondents who live in Kentucky. The survey was conducted only in English and restricted to adults ages 18 and older. Respondents who finished the survey in less than half the median time were excluded from the final sample, leaving 1,140 cases for analysis. After those exclusions, the demographic composition of respondents was as follows, although not all demographic information has complete response rates: 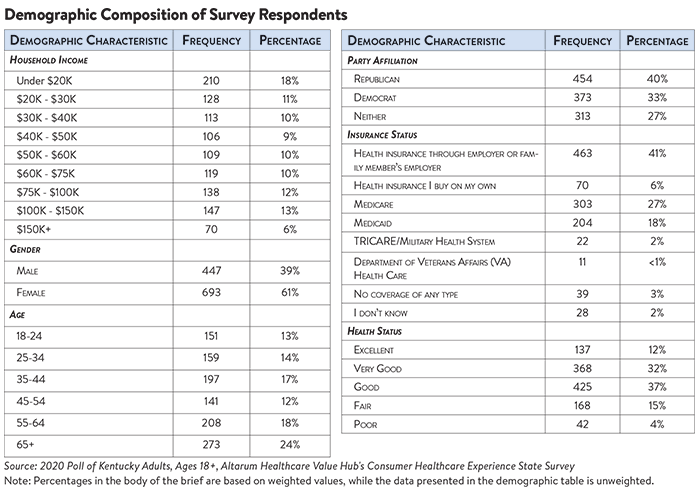