Rate review is the process by which insurance regulators review health carriers’ proposed insurance premiums to ensure they are based on accurate, verifiable data and realistic projections of healthcare costs and utilization.

Rate review for fully insured products has historically been handled at the state level using a wide variety of approaches. The Affordable Care Act (ACA) sought to set minimum rate review standards by including a requirement that the U.S. Department of Health and Human Services (HHS), along with the states, to establish processes for annual review of rates above a certain threshold to see if they are unreasonable or unjustified, before these plans are sold to consumers. Currently, federal regulations require a review whenever a carrier proposes an annual premium rate increase of 10 percent or greater, but states have the autonomy to adopt lower thresholds. Further, HHS is tasked with reviewing proposed rates of 10 percent or greater for states that fail to qualify as having an “effective rate review” program.1

Health insurance rates are something consumers care deeply about, even if they don’t know what “rate review” means. For this reason, rate filings greatly benefit from a rigorous and multidimensional review process that includes input from the public and consumer advocates.

Rate review may lower costs for consumers directly, when lower rates are approved than initially proposed. It may also benefit consumers indirectly via the mere requirement of having to file and justify increases, particularly when the review includes information on cost containment and quality improvement efforts.2 A strong example of this is the explicit review of underlying provider costs found in Oregon’s rate review process but missing in most other states.

With close scrutiny, the rate review process can uncover duplication, faulty assumptions and outright errors in the rate filings, potentially lowering costs for consumers and making rate calculations more accurate. For example, in 2014 filings in Oregon, after calculation errors were identified, both Kaiser and Providence Health Plan proposed sizable rate cuts (10% decrease for Kaiser and 15-20% for Providence), which the insurance regulator cut even further.3 In Washington state, for the 2015 plan year, rate increases were approximately 6 percent lower than proposed—reduced from around 8 percent to about 2 percent—in large part because the state required carriers to recalculate their requests when a variable used in the carriers’ calculation was modified by HHS after initial filings were submitted.

The absence of laboratory conditions makes it hard to design a strong quantitative study to estimate the impact of rate review on health insurance premium growth. But theory and anecdotal evidence strongly suggest that rate review works, especially in states with prior approval4 requirements. In Colorado, for example,5 after the FAIR act6 passed in 2008—going into effect in 2009 and changing the framework from file and use to prior approval—consumers saved more than $125 million over five years, with consumer savings increasing each year (see Table 1). 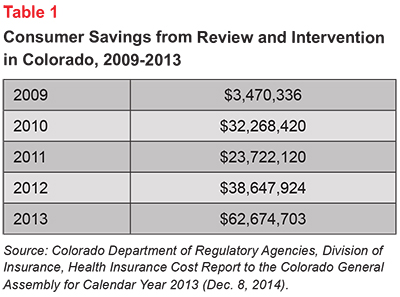 An HHS report summarizing 2013 rate review found that consumers in the individual and small group markets saved approximately $993 million in premiums, as measured by the difference between the originally proposed rates increases versus the finalized rates.7 Broken down, the individual-market average requested rate increase was reduced by 8 percent (40 states examined), while the small group market saw a reduction of 11 percent across 37 states.8

Anecdotal evidence also suggests that public participation in the process, including a role for consumer advocates and access to complete filings, strengthens the ability of rate review to contain costs. In Maryland, consumer advocates worked with the commissioner to identify shortcomings in one 2014 rate filing; the commissioner ultimately cut the insurer’s proposed premium increases by more than half, to 9.8-16.2 percent, rather than the 23-30 percent sought by the carrier.9

Health insurance is one of the most expensive purchases consumers make, it is vital to the financial and physical health of their families, and it is required under the Affordable Care Act. But in many states the rate review laws—and how they are carried out—fall short.

More than 40 million Americans10—those in fully insured coverage—stand to benefit from a strong health insurance rate review system, with the number growing each year.

Although all but five states are certified by HHS as having effective rate review programs. However, very few states have strong laws and review processes, and HHS has not stepped in to perform oversight or supersede state authority when necessary. In Florida, where the legislature prevented the insurance department from reviewing the rates of Marketplace plans for two years, health insurance premiums increased by more than 10 percent in many regions.11 Similarly, in Alaska, where rate review laws exist but are not adhered to, the final 2015 health insurance premiums increased in excess of 10 percent in every region; in the case of one carrier, the finalized premium increase was larger than initially proposed and due to the lack of transparency, the reason is unclear to the public.

Change the Threshold for Review to Include More Rate Filings

California and Oregon have enacted laws that give them authority to review all rates, but most states use the federal threshold of 10 percent or greater. Ten percent is a very high ceiling; long-term annual growth in per capita health spending growth is well below ten percent, as is wage growth for consumers (see Figure 1). 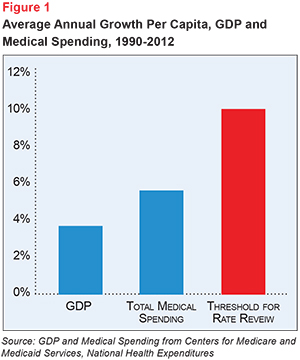 The public’s access to rate review information and public participation in the rate review process appears to increase scrutiny and improve the fairness of the final rate. Currently, in most states, public access to rate filings is very poor.

Many states and HHS allow a trade secret exemption for carriers wishing to shield their rate filing from public scrutiny. The trade secret exemption is designed to protect businesses from having key business and manufacturing details revealed to competitors for fear they will be stolen. For several reasons, this assumption needs to be revisited. Rate setting is far different from product development and actuarial calculations are not trade secrets. In fact, several states, including New York and California, do not permit rate filings to hide trade secrets, but instead require public disclosure of the complete justification for rate increases. These states feature robust, competitive health insurance markets. The use of the exemption in this context appears only to protect insurers from public scrutiny but not from any actual threat from competitors.

In 2014, for the 2015 plan year, public access to rate filings were inconsistent nationally, with many states restricting access to materials wholesale or until after rates had been finalized, or even until open enrollment or the new plan year.12 On the basis of this exemption, HHS withheld 2015 rate filings from the public despite an urgent request by Consumers Union and more than 70 cosigners,13 as well as a legal obligation via separate Freedom of Information Act (FOIA) requests from Consumers Union and the Consumers Council of Missouri; the latter refusal was the subject of a separate lawsuit which was dismissed in the spring of 2015 due to HHS’s announcement that it would make rate Missouri’s rate filings available.14 Although a positive step on its face, the filings HHS did provide for that state were released far after rate review ended for the plan year and in some cases were significantly redacted pursuant to the trade secret exemption.

A robust process for public participation includes: policyholder notification at the beginning of the rate review period; access to the full rate filings as well as consumer-friendly summaries; a public comment period; and public hearings where appropriate and viable. When states do not provide this transparency, HHS must step in and—in a timely fashion—make publicly available all rate review justifications, and underlying data, submitted to the department. In 2015, HHS moved the ball forward on transparency by streamlining the filing and rate review process. Under the rules set in the Benefit and Payment Parameters, HHS set a timeline for carriers to submit rate filings, states and HHS to make filings available to the public, and for states to finalize rates. On the heels of a troubled rate review process in 2015, these new regulations suggest advancement. Whether the goal—a rigorous and unified nationwide review process—can be achieved remains to be seen.

Couple with Prior Approval Authority or Active Purchaser Exchange

State insurance regulators that lack the authority to deny rate proposals have few options when rates are found to be unreasonable. Currently 14 states15—not including those without an effective rate review program—lack prior approval authority for some or all of their market. Some states, such as California, may not have prior approval authority, but have Exchanges that negotiate rates with plans—an “active purchaser model”—which can also conduct robust scrutiny of rates for customers that purchase those products and keep rate increases in check.

Some state statutes, such as California17 and Rhode Island,18 include consideration of health system cost containment efforts. In 2010, a law went into effect in Oregon that expanded the factors the Insurance Division could consider, such as how each carrier approaches cost containment and quality improvement, as well as scrutinizing whether administrative expenses are reasonable. A study of the impact of these new rules found that by 2013, state officials had cut rate hikes by more than 17 percent on average, compared to 6 percent on average prior to 2010. At the same time, carriers’ initial rate requests also declined.19 In addition, rate review decisions were found to have reduced the portion of premium spent on administrative costs by 5.4 percent on average, going against the trend seen before 2010. As of 2015, it is estimated that the Oregon rate review program has cut about $179 million in unjustified costs from premiums since 2010.

Far too many consumers around the country are not realizing the full benefits of a robust rate review program. Federal and state legislators and regulators should do more to balance the needs of consumers against insurers’ desire to avoid a more thorough scrutiny of their filings.

1. In 2014, those states were: Alabama, Missouri, Oklahoma, Texas and Wyoming. For more on state effective rate review programs, see http://www.cms.gov/CCIIO/Resources/Fact-Sheets-and-FAQs/rate_review_fact_sheet.html.

4. In prior approval states, health insurance carriers must receive approval for rate changes from their regulating agency. However, in many jurisdictions, prior approval requirements come with a “deemer” period. If the regulator does not act within that prescribed time period, the rate is approved.

8. Premium rate reduction was calculated by taking the average difference between rate changes requested and rate changes implemented, weighted by the number of covered lives, and multiplied by the estimated total U.S. premiums. The report extrapolates an estimated total reduction in premiums in the individual market resulting from rate review, assuming that states without available data are similar to states that reported data

10. Data compiled by Kaiser Family Foundation from the Current Population Survey show 19 million enrolled in nongroup coverage in 2013. Data from the Medical Expenditure Panel Survey show another 19 million workers enrolled in fully insured products in 2013. Enrolled dependents of these workers, as well as the newly insured due the affordable care act reforms that began in 2014 could easily bring this number higher than 50 million. Sources: (1) http://kff.org/other/state-indicator/total-population/ (2) http://meps.ahrq.gov/mepsweb/survey_comp/Insurance.jsp.