Why are Healthcare Costs an Urgent Problem?

For Decades, Healthcare Costs Have Risen at Rates that Outpace the General Rate of Inflation

There is strong evidence that we aren’t getting the value that we should for our healthcare dollar. Quality is uneven and an estimated 30% of our spending is considered unnecessary.

These cost and value issues aren’t just an academic exercise—they have a profound impact on the health and financial security of American families. 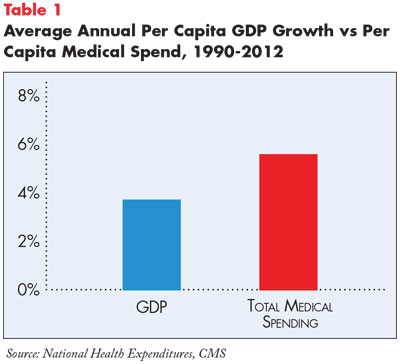 Periodic surveys by the Kaiser Family Foundation reveal that half the U.S. population goes without needed care due to concerns about the costs they will have to bear. And one-quarter of those who do get care have trouble paying their medical bills.1

Rising Healthcare Costs are Wiping out Almost all Income Growth

A RAND analysis compared a family’s healthcare cost burden in 1999 with that incurred in 2009.2 The take-away message: although family income grew throughout the decade, the financial benefits that the family might have realized were largely consumed by healthcare cost growth, leaving them with only $95 more per month at the end of the decade. Another study shows that the cost of healthcare has resulted in relatively flat real wages for 30 years.3

Low-income families are less likely to have health insurance to help with medical costs. Further, when low-income families do have employer coverage, health premium increases (being a fixed expense) absorb a larger share of the employee’s compensation compared to a high-income employee. In one study, workers in the bottom-income group who were insured had a ratio of employer-paid premiums to household income of 20 percent, compared with 3.3 percent for the top-income group.4 Hence, rising healthcare costs contribute to income inequality around the country.

…but rising healthcare costs are an issue for middle-class families as well.

In 2009, a fifth of middle-income people under 65 reported spending more than 10 percent of their incomes on healthcare expenses—up significantly from 2000, according to a report commissioned by the AARP Public Policy Institute.5 Even middle class families with insurance find they struggle to pay their share of the medical bills.

Rising healthcare spending forces painful tradeoffs within household budgets, but also in state and federal budgets. These are tradeoffs we’d rather avoid, like reducing spending on education or charging Medicare beneficiaries more for care.

It’s Time for Sustained Policymaker Focus on this Issue

The stress and economic pain on families associated with healthcare spending is not necessary. Other industrialized countries provide healthcare for their citizens at a significantly lower cost than the U.S. As noted above, up to one-third of U.S. health spending may be unnecessary. While this policy problem is not new, it has not yet received sustained, comprehensive attention from policymakers.

Affording healthcare is a top-of-mind issue for both insured and uninsured people, according to a Consumers Union study.6 In focus groups and a nationwide survey, consumers signaled they want policy makers to take action on this important issue.

2. Auerbach, David I., and Arthur L. Kellermann, How Does Growth in Healthcare Costs Affect the American Family?, RAND (2011).