Competition in healthcare, while increasingly rare, helps control prices, encourages the delivery of high-quality products and services, and promotes consumer choice. However, antitrust laws designed to preserve competition have been largely ineffective since the 1990s, and persistent consolidation among providers and insurers has contributed to high (and rising) healthcare costs. As a result, states have relied upon alternative approaches to mitigate anti-competitive effects after mergers occur. This brief describes these efforts and identifies additional strategies to prevent future consolidation.

What are Antitrust Laws and Who Can Enforce Them?

Each of these categories has specific requirements and limitations reflecting the interpretation of the law by the courts. These laws can be enforced by the U.S. Department of Justice, the Federal Trade Commission and by states’ attorneys general. Most states also have their own versions of antitrust law, enforced by the state attorney general.1

What Happens When Mergers and Acquisitions are Allowed to Proceed?

Studies have found that antitrust laws are generally under-enforced.2 For a variety of reasons, many mergers and acquisitions are allowed to move forward, forcing regulators to grapple with the subsequent anti-competitive effects.3

Healthcare organizations typically argue that mergers improve efficiency and create economies-of-scale, improving quality and reducing costs. Yet little reliable evidence supports this claim.5 In fact, ample evidence demonstrates that healthcare mergers increase prices and that less competition may lead to lower quality.6,7 Mergers may also negatively affect other important aspects of the healthcare system, such as the healthcare workforce, health systems’ responsiveness to community concerns and access to care.8

States can hold healthcare organizations accountable for delivering promised benefits by placing conditions on mergers designed to improve affordability, expand access, improve quality or reduce complexity. For example, some states have prohibited insurers from financing the cost of mergers by raising premiums. Other states have required organizations to invest in consumer assistance programs, infrastructure development and quality improvement initiatives. Specific examples of these requirements are provided below in Appendices A-D.

Alternatively, some states (including Tennessee, Virginia and North Carolina) have attempted to mitigate harmful effects of consolidation by issuing certificates of public advantage (COPA)-legal agreements in which states exempt organizations from antitrust scrutiny in return for commitments to make public benefit investments and control healthcare cost growth.9 Evidence is still emerging on the effectiveness of this strategy,10 however, a study of North Carolina’s experience documented substantial risks.11

Other strategies that states can pursue include:12,13

A 2017 study by The Commonwealth Fund revealed that 90 percent of provider markets and 60 percent of insurer markets were either highly or super-concentrated as of 2016.15 To prevent further consolidation, states should consider:

Antitrust laws aim to promote healthcare competition by prohibiting anti-competitive behaviors; however, the laws are generally under-enforced. As a result, many healthcare mergers and acquisitions with anti-competitive effects move forward, increasing prices and potentially sacrificing quality of care. While the appropriate path forward is hotly debated (and will vary according to states’ political environments and unique regulatory structures), there is increasing support for alternative strategies to protect consumers from the potentially harmful effects of healthcare consolidation. 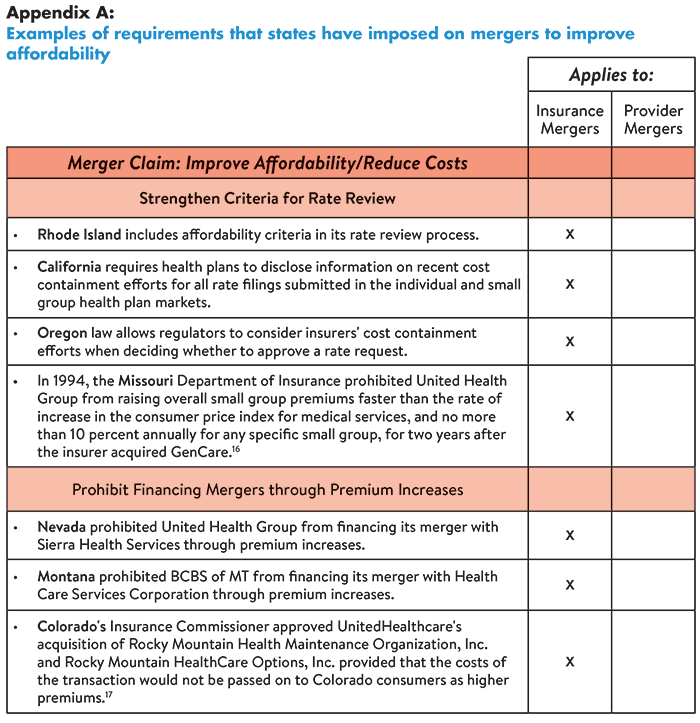 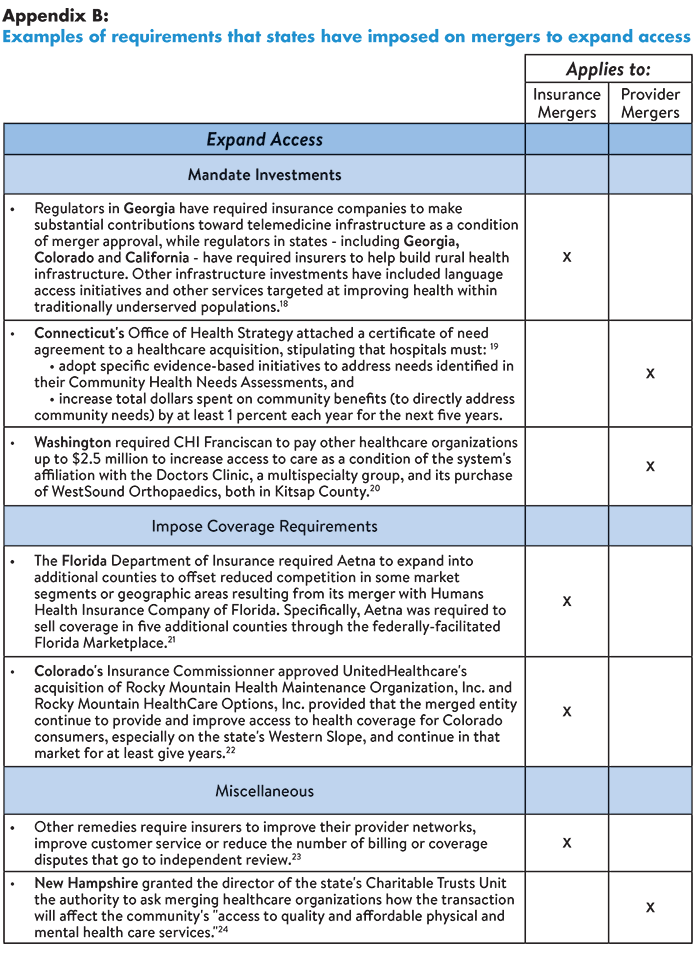 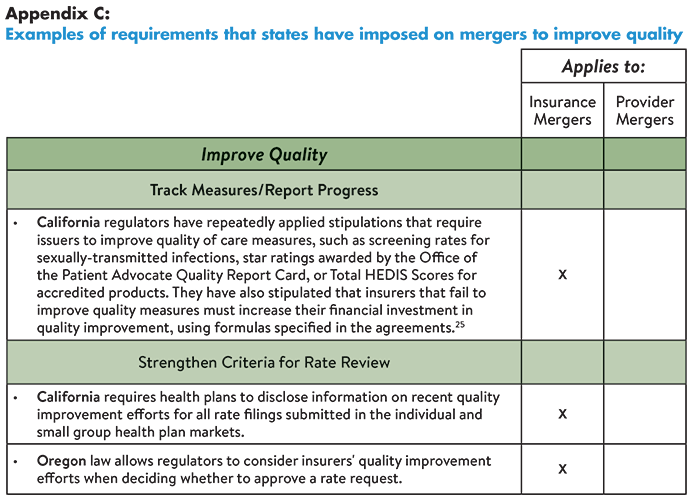 5. A few studies have documented modest price reductions after mergers among providers, however, the reliability of the data source used is debated. See: Ibid.

7. One study found that market concentration in the Medicare Advantage (MA) program was associated with higher premiums, however, the plans had a higher predicted probability of receiving a high-quality rating compared to MA plans sold in highly competitive markets. This finding suggests that a more nuanced approach than competition may be needed to ensure plan quality at the local market level. See: Adrion, Emily, “Competition and Health Plan Quality in the Medicare Advantage Market,” Health Services Research, Vol. 54, No. 5 (October 2019). http://www.hsr.org/hsr/abstract.jsp?aid=54367621500

23. Ibid. See also: Colorado Office of the Attorney General, “Antitrust Challenge and Settlement to the UnitedHealth Group and DaVita Merger will Safeguard Competition, Cost, and Quality of Healthcare for Seniors in the Colorado Springs Area,” News Release (June 19, 2019). https://coag.gov/press-releases/06-19-19/