Administrative spending refers to the costs incurred by insurers, hospitals, doctors’ offices and other entities to conduct the business side of healthcare. These costs reflect billing and insurance related activities (BIR), enrollment and member administration, marketing costs, provider and medical management, corporate services and other non-clinical functions.

What is Included in Administrative Spending?

Understanding the full scope of administrative spending means considering the various healthcare stakeholders and types of expenses that each stakeholder incurs. Stakeholders ranging from insurers and payers, to hospital and other providers and patients are incurring administrative expenses (see Table 1). 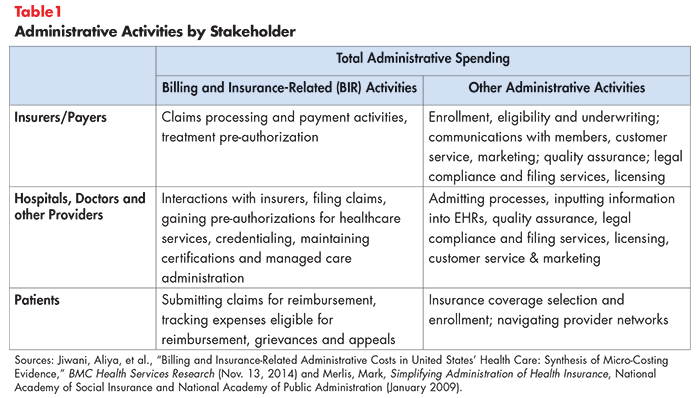 Administrative Cost by Type of Payer

Private payers have higher administrative spending than public payers, with the former spending more on marketing and having greater variation in the rules for reimbursement compared to public payers (see Table 2).7 In contrast, public payers like Medicare are not subject to certain administrative expenses like state taxes, licenses and fees or capital requirements. Moreover, enrollment and billing are handled by the Social Security Administration and are not reflected as costs related to Medicare.8 Nonetheless, private insurance administration is frequently cited as ripe for potential saving.9 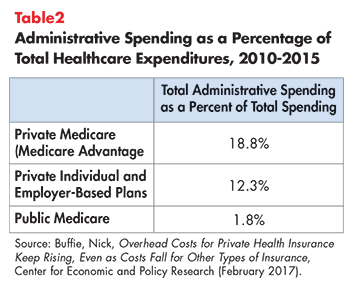 Where is the Excess?

Administrative waste cannot be measured directly, yet comparative data suggests that there is waste to be trimmed.10

A key segment of wasteful administrative spending is found in the significant amount of paperwork needed in our multi-payer healthcare financing system. Having myriad payers, each with different payment and certification rules, increases the complexity and duplication of tasks related to billing and reimbursement activities. Hence, the total BIR component of administrative spending—representing about 18 percent of total healthcare expenditures11—is often singled out as wasteful and a potential source of savings. An often-cited statistic is that hospitals generally have more billing specialists than beds.12

Using the standard of a simplified payment system (such as a single payer) as the rubric, one set of researchers estimated that $375 billion would have been saved from reduced BIR in 2012 (see Table 4).13 Put another way, this excess spending represents about 80 percent of BIR spending in the current multi-payer system, translating to a  potential savings of nearly 15 percent of overall healthcare spending.

Both Tables 3 and 4 show significant spending associated with physician offices’ BIR activities, such as interacting with multiple health plans on claims and billing, obtaining prior authorization for patient services, navigating drug formularies and managed care administration. One study found that, in an average week, physicians spent 24 percent of their time on administrative duties related to patient care.14

An earlier 2011 study found that American physicians spent four times as much money interacting with payers as their Canadian counterparts. Providers have difficulty with issues related to prior authorizations and formulary restrictions, high rates of nonpayment for initial reimbursement submissions (10 to 15 percent) and underpayments (5 to 10 percent).15 A recent study found that the share of claims challenged or denied varied significantly by type of insurer, with Medicaid being the most challenging to bill successfully and Medicare the least challenging, although similar to private payers.16

In addition to BIR activities, a time-and-motion study in an ambulatory practice across four specialties found that for every hour a physician spent providing direct clinical care to patients, he or she spent nearly two hours on electronic health record (EHR) and other desk work, plus another one to two hours on documentation each night.20 The EHR and desk work included documentation, file review, accessing test results and arranging medication orders. While many of these administrative tasks might not be considered “excess”—most are tasks that improve patient outcomes—the cumulative effect of administrative burden is of great concern to the profession. Administrative burden is a key cause of physician burnout.21

Two components of these expenses have undergone significant changes due to the Affordable Care Act’s provisions with respect to non-group coverage—the coverage individuals buy on their own. These are worth recalling as the promotion of non-compliant ACA plans could re-introduce theses expenses:

Medical underwriting–common in individual and small group plans prior to the Affordable Care Act reforms that began in 2014 would have been included in earlier estimates of private health plan administrative costs.24 One researcher estimated that underwriting costs might be 2 percent or more of total premiums for small group and non-group carriers.25

Before the ACA, insurance companies on average paid brokers a 5 percent commission based on monthly premiums for plans sold in the individual market, but many health plans are no longer paying commissions.26 One reason for the pressure on commissions is that the ACA’s insurance marketplace was intended to be self-service—robust consumer protections and standardization in coverage enabled people buying plans without a middleman.

Large Gaps in Our Understanding of Excess Administrative Costs

Our current understanding of administrative spending relies on a patchwork of mostly aging analyses, leaving policymakers very much in the dark when it comes to addressing this growing category of healthcare spending.

Other data gaps include research to identify potential administrative waste associated with provider credentialing, pre-authorization or grievances and appeals.

Several approaches have been proposed to curtail excess administrative spending, some feasible within our current multi-payer system and some premised on a health system with simplified and streamlined payment methods.

Under all approaches, our first line of defense is to improve data collection.28 Policymakers should require standardized definitions for the components of health system administrative spending and expand data collection efforts, particularly with respect to consumer, physician and hospital administrative spending. The improved and timely information can be used to establish targets to address waste.

Many states and the federal Affordable Care Act require health insurers to devote a minimum proportion of premium revenues to clinical services and quality improvement, a standard known as the Medical Loss Ratio (MLR).42 Prior to the Affordable Care Act, many consumers who purchased coverage in the individual market were in plans spending more than 30 cents of every premium dollar on administrative costs and profit.43 Now, most payers are required to spend 80-85 percent of premium dollars on medical care, and the share they are paying towards administrative costs, quality improvements and profit is correspondingly 20-15 percent.

Policy analysts give this approach mixed marks. Opponents note that this policy provides an incentive to let premiums rise as higher premium revenue means the portion allowed for MLR is a higher dollar amount. On the other hand, insurance products known as short-term plans are not subject to these federal MLR minimums and they have reported loss ratios that are significantly less favorable for consumers. The average loss ratio for short-term policies on the individual market in 2016 was 67 percent; while for the top two insurers, who together sold 80 percent of all short-term policies in this market, the average loss ratio was 50 percent.44

Streamlining Administrative Tasks by Moving to a Single-Payer System

A single-payer system consolidates basic insurance functions into a single entity. Medicare coverage is an example of a single-payer system, with the exception of those enrolled in private Medicare Advantage plans. Billing procedures would be simplified and streamlined under such as system. Similarly, a universal coverage approach can eliminate the expenses associated with determining eligibility for coverage, depending on the specifics of how it is enacted.

As noted above, evidence from the Medicare program demonstrates that large, unified payers can achieve significantly greater efficiencies than multi-payer systems. Unified payment schemes enjoy economies of scale, sharply reduce the burdens of claims processing, and eliminates the need for marketing, advertising and underwriting expenses.

Countries with single-payer systems, such as Denmark and France, have lower spending attributed to governance and administrative costs. Spending related to planning and managing health systems and services, as well as government regulation, accounts for 8 percent of governance and administrative costs in the U.S. In contrast, this type of spending in other developed countries accounts for 1 to 5 percent.45 It is important to note that this analysis does not include hospital profits.

As noted above, one research team estimates a simplified payment system (such as a single payer) would have saved an estimated $375 billion in 2012.46 Put another way, this excess spending represented 80 percent of BIR costs in the current multi-payer system. Simplified financing system in the U.S. could saving nearly 15 percent of healthcare spending.

But how much a single-payer system can cut administrative costs depends on how the plan is designed and implemented. For example, is there a private insurance function that provides supplemental coverage to the public health plan?

While hard estimates of administrative waste in the U.S. healthcare system are hard to come by, comparative data suggests there is significant excess administrative spending. A majority of this spending is associated with our multi-payer financing system which results in a wide variety of rules regarding provider credentialing, quality assurance, billing and payment. Moreover, the consumers’ administrative burden of interacting with this complex system has never been tallied. Indeed, it is barely acknowledged.

In light of the high healthcare affordability burdens being placed on consumers (via premiums, direct out-of-pocket-costs, taxes and foregone wages) and provider burnout associated with administrative burden, it is critical to reduce the burden and spending associated with administrative waste. Critical steps include simplifying and standardizing the myriad, misaligned, payer-specific rules in our current multi-payer system. Additional progress could be made by creating a pathway for states and localities to move to a single-payer system.